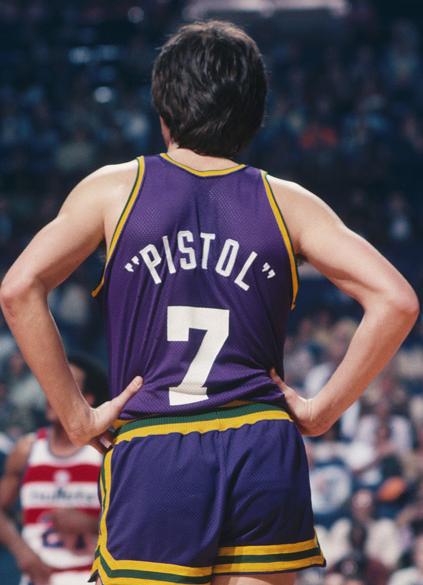 This past February 25th marked the anniversary of one of the NBA’s great single game scoring performances by none other than Pistol Pete Maravich.

Pistol Pete is considered one of the first NBA players to perform with a flare and style that was often only reserved for the playgrounds. Pistol Pete was flamboyant and attempted things in games that others players were too scared to even attempt in practice.

Pistol Pete is credited with changing league culture as his imagination with shooting and passing defined and transformed his generation in the same way in which Bob Cousy of the Boston Celtics had done in his generation.

Pistol Pete’s style and large million dollar contract rubbed some of teammates the wrong way and Pistol Pete had a difficult time fitting in with the team that selected him number 3 overall in the draft, the Atlanta Hawks. Coaches and players often told Pistol to keep his innovativeness out of real games. However, Pistol Pete knew that he possessed something special and when he finally exploded onto the scene, especially in his third season in which he averaged 26 PPG, he never looked back. Pistol captivated audiences with his blend of professionalism and flare. Crowds lined up to watch Pistol Pete because they knew there was a chance they would see something they never saw before. Pistol didn’t overdo his theatrics, he blended them seamlessly into his fundamentally sound game.
A modest and humble Pistol Pete had this to share in an interview after his historic scoring game:

“I could have scored more,” Maravich says. “I missed a lot of easy shots early in the game.”

Pistol Pete passed away at age 40 while playing basketball inside of a church gym. Pistol Pete was a basketball lifer that dedicated his existence to perfecting his craft and developing moves and tricks that no one had ever witnessed before. The next time you see a young person getting fancy on the playground, remember that Pistol Pete’s memory and tradition are written all over that no look pass, and all over the fake which attempts to shake opposing players out of their high tops.

Contributing writer Jasen Sousa for Premier Hoops is the author of a number of poetry and fiction books for young people. Jasen has an M.F.A. in Creative Writing and is a life-long participant and fan of the game of basketball