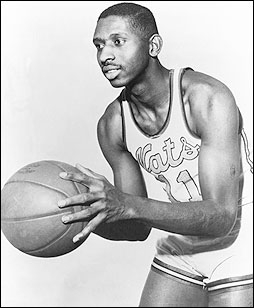 On October 31, 1950, 21-year-old Earl Lloyd became the first African-American to play in an NBA game when he took the court in the season opener for the Washington Capitols. In a time when American society was going through a huge cultural shift, basketball and sports helped to change and push forward race relations. Earl joined an entirely white Washington Capitals team which was overwhelming in its own right, but the transition was helped due to the fact that many of his teammates had already played on integrated college basketball teams.

It is important to realize this fact because if Lloyd’s teammates did not have experience with integration in college and come to realize that having a black teammate was not wrong or harmful, the transition might not ever happened. The great thing about sports and being part of a team is that you when hear negative things in society which might be common thought, you get to make your own judgements based on the individuals and the evidence sitting next to you. Being part of a team dispels myths and breaks down barriers which we might be too afraid to tackle in our normal everyday lives.

I think about all of the different individuals I have met over the years simply by playing the game of basketball. Individuals from different cultural, social, and economic backgrounds that I sweated with, bled with, laughed with, and cried with on the court, and within the locker room. We rode buses together, shared lockers together, hung out at each other’s houses before and after games and practices. We learned that even though we might have looked totally opposite, there were so many similarities which we shared that made us human, that made us kids, that made us basketball players, that made us the same.

However, fans and the rest of society were not so quick to welcome and root for Earl Lloyd. Lloyd endured countless negative and derogatory remarks from fans which would have sent many men to their breaking point. Earl Lloyd along with other African-American pioneers such as Chuck Cooper and Nat “Sweetwater” Clifton paved the way for race relations within American and within other major professional sports.

The next time you are at practice or at a game, look around you and notice how different everyone might appear. Different skin colors, different hair styles, different sneakers, different views on life. As the season goes along look at the same people and you will come to realize that you no longer focus on the differences of your teammates, but only on the things in which you share in common. We all sweat the same, fear getting that homework assignment done, we all want to be popular and well liked. Think about that the next time you hear someone focusing on our differences as people, and think about Earl Lloyd the next time you find yourself sitting within a diverse locker room.

Contributing write.r Jasen Sousa for Premier Hoops is the author of a number of poetry and fiction books for young people. Jasen has an M.F.A. in Creative Writing and is a life-long participant and fan of the game of basketball